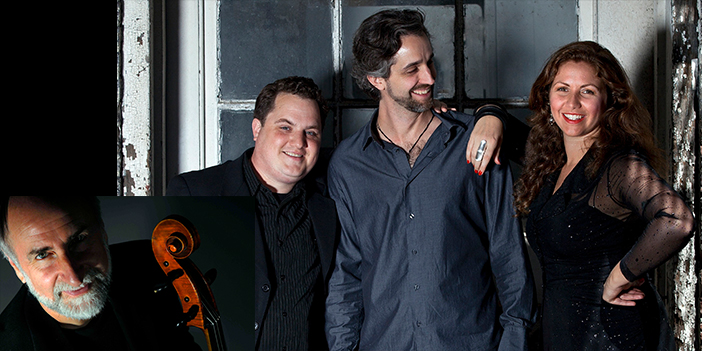 A singer whose entrancing voice evokes the dramatic landscape of her homeland; a formidable pianist who knows the Jazz and Cuban music idioms intimately and grooves unwaveringly; a guitarist who slides fluidly between classical and blues-based phrasing on an instrument borrowed from the Choro traditions of Brazil. These three voices comprise the unique sound of New York City-based world jazz trio, La Voz de Tres.

With the 2010 release their CD La Voz De Tres, the band began to appear at some of the top jazz venues in the country, including Blue Note, Zinc Bar and Smoke (NYC), the Tempe Center for the Arts and the Nash (AZ) and the Kuumbwa Jazz Center (CA). The group has also appeared live on air on several major NPR affiliates. The CD received extensive national airplay, including being played on Jim Wilke’s Jazz After Hours on PRI. The following year, La Voz De Tres was invited by the municipal government of Iquique, Chile to conduct a week of workshops and performances.

The music of the trio’s 2014 follow-up recording, entitled Sueños y Delirios, is thematically centered on the idea of dreams. Utilizing many rhythms of the Americas, the trio weaves material from all parts of Latin America (and the U.S.) into a new entity that speaks to dreams both waking and unconscious. La Voz de Tres were joined by two special guests on this new release; Chilean percussionist Yayo Serka and saxophonist Michael Zsoldos. Sueños y Delirios includes an original composition by Ennis as well as the music of Silvio Rodríguez, Milton Nascimento, Antonio Carlos Jobim, Guinga, Arsenio Rodríguez, Stevie Wonder, César Portillo De La Luz, and Pablo Ara Lucena.

Recently, the La Voz De Tres has worked collaboratively with composer and multi-wind player Paul McCandless, whose work with the original Paul Winter Consort and the group Oregon has long been an inspiration for the trio. In this concert, the trio features another longtime friend, unique composer/improviser and multi-genre cellist Eugene Friesen.

“These are players who seem born to work together, who listen intently, and respond in fresh and original ways.... La Voz de Tres is a singular group no true music lover will forget.”

A graduate of the Yale School of Music where he studied with Brazilian cellist Aldo Parisot, Eugene Friesen is active internationally as a concert artist, composer, conductor and teacher. In 1995 and in 2006 Eugene won a Grammy Award for musical contributions to two Paul Winter Consort albums, “Spanish Angel” and “Silver Solstice.” He has worked and recorded with such diverse artists as Dave Brubeck, Toots Thielemans, Betty Buckley, Will Ackerman, Joe Lovano and Dream Theater.

As conductor of the Berklee College of Music String Orchestra in Boston, Eugene has composed and arranged a diverse repertoire of work for strings utilizing his love for improvisation and rhythm in contemporary, jazz and world fiddle styles.

Eugene was the 1999 recipient of grants from the Lila Wallace/Reader’s Digest Fund and Continental Harmony to compose a symphonic setting of Carl Sandburg's PRAIRIE, which was premiered in June of 2001 in Kansas.

Eugene's passion for the responsive flow of improvisatory music has been featured in concerts all over the world with the Paul Winter Consort and with Trio Globo (Friesen, Howard Levy and Glen Velez). He has performed as a soloist at the International Cello Festival in Manchester, England; Rencontres d'Ensembles de Violoncelles in Beauvais,France; the World Cello Congress in Baltimore, Maryland; and the Rio International Cello Encounter in Rio de Janeiro.

Recording credits include five albums of original music: New Friend, Arms Around You, The Song of Rivers, In the Shade of Angels and Sono Miho.

Eugene is an artist-in-residence at the Cathedral of St. John the Divine in New York City, and on the faculty of the Berklee College of Music in Boston. He lives in Vermont.

Natalia Bernal, Chilean vocalist
Natalia Bernal was raised in the beautiful coastal city of Iquique, nestled between the Pacific Ocean and the Atacama Desert. Based in New York City since 2007, her sound embodies the drama and intensity of the natural surroundings of her homeland. From an early age, she was immersed in a rich musical tradition: she learned the great Latin American standards from her Chilean father and Uruguayan mother, and she breathed deeply of the "Música Popular" from Chile, Argentina, Uruguay, Cuba, Peru and Brazil. Through her studies at Escuela Moderna de Música (Chile) and Berklee College of Music (USA), Natalia expanded her jazz vocabulary to create a sumptuous tapestry of sound that remains suffused with the rhythms and melodies and of trovadores of Latin America.

Michael is equally at home in jazz and latin-American music forms. He recently arranged and recorded an album in Cuba with Pepito Gomez and Orquesta Akokan (Daptone Records) which has received rave reviews on outlets like NPR and recently gained a grammy nomination in the tropical category. Recently having completed a PhD at NYU, Michael currently teaches jazz piano at Dartmouth College.

As co-leader and collaborator with a number of New York-based groups (La Voz De Tres with Jason Ennis and Natalia Bernal being one of the most long-standing), Michael has performed in festivals and venues all over the United States, latin America, Europe and the world. He is also an avid composer and recording artist with several of his own and collaborative albums to his name within the jazz and latin jazz genres.

Jason Ennis, Guitarist
Jason Ennis is an exciting voice in the world of jazz guitar. His unique sound, deep groove and sensitive feel, along with a diverse background in jazz, blues, Brazilian music and classical music have made him highly in demand as a soloist, sideman, bandleader and musical director. A graduate of Middlebury College (BA in music), Jason attended Berklee College of Music (Boston) and The San Francisco Conservatory of Music.

Ennis has performed and/or recorded with Tessa Souter (Motéma Music), Charles Neville (The Neville Brothers Band), Paul McCandless (Oregon, The Paul Winter Consort), The Sonya Kitchell Band (Velour Music, Starbucks Hear Music), Todd Reynolds (Bang on a Can, Steve Reich), The I/O Ensemble under the direction of percussionist Matthew Gold, actor and musician Joe Morton, Mary Ann McSweeney’s Urban Fado Project, The Ramón Ángel-Rey Trio, Samirah Evans and Her Handsome Devils, Choro da Manhá, The Julio Botti Quintet, Pablo Ziegler and others. In summer of 2016, he played in the world premier at the Williamstown Theater Festival of the musical Poster Boy, by Craig Carnelia and Joe Tracz. Ennis transcribed and edited a collection of solo guitar arrangements by his friend and mentor, Gene Bertoncini, which was published in 2012 by Hal Leonard Publishing.

Ennis leads his own instrumental group, Trio Jota Sete, and co-leads the world jazz trio, La Voz de Tres, which has toured extensively throughout the United States and Chile and has released two CDs: La Voz de Tres (2010) and Sueños y Delirios (2014). His searing blues style is a corner stone of the NYC-based jazz/blues powerhouse group, Opius Bliss, fronted by vocalist Michelle Walker. He is a member of The Thomas Bergeron Ensemble, whose May 2015 release, Sacred Feast, presents re-imaginings of selected works by French composer Olivier Messiaen, and is co-composer and musical director for En Diablada, an original music project by Chilean vocalist Natalia Bernal, inspired by Andean folkloric traditions.

Since Fall of 2015, Ennis has been a Lecturer in Music at Dartmouth College, where he teaches jazz, world and popular guitar styles. Currently residing in Pittsfield, MA, he teaches guitar privately and at the Berkshire Music School, is a faculty member at Interplay Jazz in Woodstock, Vermont and has given workshops at colleges and Universities throughout the US and Chile. For more information and a current listing of upcoming performances, please visit www.jasonennis.com.

"The musicianship is impeccable and Ms. Bernal's voice is a revelation."